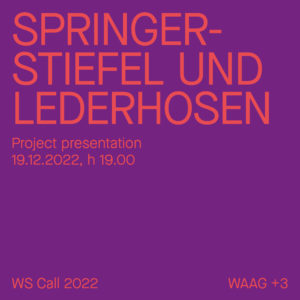 On 19.12 the team of Springerstiefel und Lederhosen – one of the 3 winning projects of WS Call 2022 – presents the results of their project at Casa della Pesa, meeting at 19:00 with the team made up of Alexander Indra and Mara Stirner.

“Springerstiefel und Lederhosen” is a multimedia research on neo-Nazi violence in the Merano area in the early 2000s. Through audio interviews with the victims and with those who actively opposed the activities of right-wing extremists a panorama of personal memories between impotence and resistance is created.

Where were neo-Nazis active at the time? How were they networked? And how does right-wing sentiment turn into violence? In conversation with Sarah Trevisiol, anthropologist and cultural workers, we will try to look back and talk about the context between then and now. On the one hand, to understand what happened at the time and, on the other hand, to classify the growing racism and right-wing movement in South Tyrol.