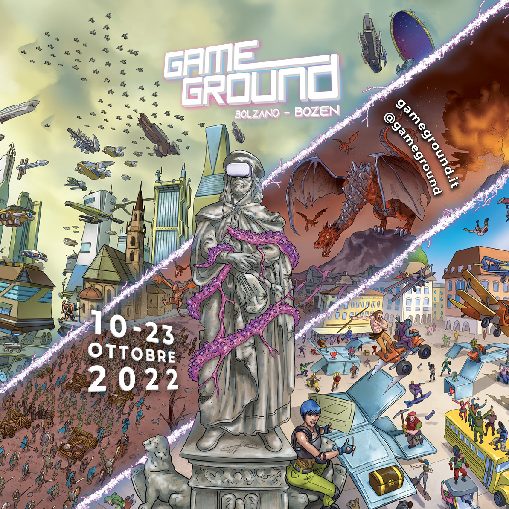 As part of Game Ground videogame festival, WaagHaus will host an interactive retro-gaming exhibition from 13 to 23 October: several free playable selections exploring the potential of video games in terms of creative expression, historical value and technological innovation, without ever losing sight of fun!

THE THOUSAND FACES OF STORYTELLING: CINEMA, VIDEOGAMES AND OTHER STORIES

In its more than 50 years of existence, videogames have established frequent links with other media, developing their own peculiar expressiveness and narrative modes in open dialogue with cinema, but also sometimes with literature, comics and animation.

If, on the one hand, science fiction and genre cinematography have provided videogames with a set of themes to draw on – think of Space Invaders or Galaxian – often the relationships have become even stronger, and it has happened that imaginary universes and characters linked to the big screen have come back to life in the form of videogames: dozens of games inspired by the Star Wars saga, titles from Alien, Ghostbusters, 007, Rambo and Rocky. And then videogame transpositions of Marvel and DC Comics superhero stories, the intermediate crossovers of the successful beat’em up series Marvel VS Capcom, Disney games such as Duck Tales, Hercules and more recently Kingdom Hearts.

Gaining maturity, the video game has entered a system of cross-references in which its stories are combined with those of films, comics and cartoons, within a single overall narrative. Literature is also part of this process of exchange, albeit often filtered through the forms of other media (Alice in Wonderland) or transfigured to the limits of paradox (Dante’s Inferno). The selection showcases iconic characters that move across the boundaries between different screens and physical media, from Batman to Luke Skywalker, from James Bond to Mickey Mouse.

SELECTION FEATURED IN THE EXHIBITION

The Adventures of Batman & Robin

Ghost in the Shell